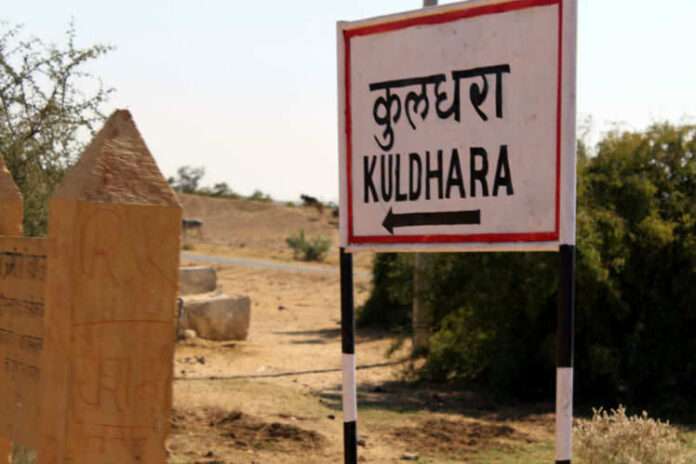 Kuldhara is located around 20 kilometers west of the Rajasthani desert town of Jaisalmer.

As I travel the unpaved road that leads there, I am struck by how few people are present. The foliage is sparse, and the timid wandering goats have most likely devoured the last of it. When I arrive at the town’s damaged gates, the afternoon sun is scorching. Kuldhara is deserted, and there is an eerie silence in the air. The inhabitants of this community left 200 years ago.

Why has a once-thriving village become little more than a decrepit old ruin?

I come across two shepherd boys who, for the pittance of Rs. 10, tell me about the folklore and curse of Kuldhara.

The Paliwal Brahmins lived in Kuldhara some 200 years ago, during a time when powerful monarchs and ministers ruled. During this time, Salim Singh, the Diwan of Jaisalmer, who was infamous for his drunkenness and shady tax-collecting practices, fell in love with the village chief’s lovely daughter. The Diwan was dead set on obtaining the girl, and he warned the locals that if they got in his way, he would tax them heavily.

Fearing Diwan’s wrath, the entire hamlet was left in the dead of night, leaving behind their houses and everything they owned. Kuldhara had been deserted by its own people. No one saw the village’s tens of thousands of residents leave. No one knows where the Paliwals have settled for generations. All that is known is that when they left, they cursed the town, claiming that no one would ever be able to dwell in Kuldhara again.

Because the village remains barren and abandoned, the curse still holds true.

The dwellings are nearly in the same state as when they were abandoned by their previous occupants. As I mount the steps of one of these houses, I can see the entire village. Lanes and brick houses are properly set out, equidistant from one another.

In the midst of a cluster of dwellings, I notice a small temple. Small recesses on the walls previously held tiny miniature lamps.

The people of neighboring villages close the gates of Kuldhara as the sun sets across the sand dunes.

They say Kuldhara’s ghosts still haunt the area.
A shiver runs down my spine. Is it because of the eerie atmosphere or the desert’s chilly nighttime breeze? I’m not sure about that. The tale and curse of Kuldhara, on the other hand, have piqued my interest.

The Archaeological Survey of India manages Kuldhara as a heritage site today.