The promise of king Dashratha 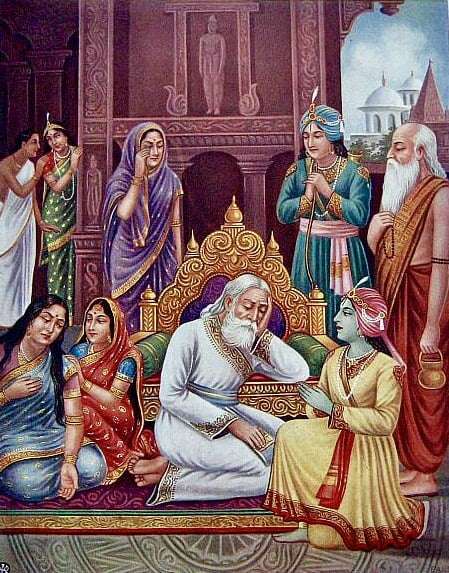 Navratri is celebrated across the country and Ramlila has also started.  The birth of Rama is shown on the first day in the staging of Ramlila.  Everyone knows that Shriram had four brothers.  But very few people know that Ram had a sister in his family who was older than all the brothers.  But due to a promise from father king Dashratha, his sister could never live with Ram and other brothers.  Perhaps that is why the mention of Shri Ram’s sister is rarely seen in Ramayana and Ram Charitmanas.

Rama’s sister is mentioned in the Ramayana as Shanta.  Shanta was born from Kaushalya’s womb and was the first child of king Dashratha.  But instead of Ayodhya, she grew up in the house of King Rampad of Anga.

The story goes like this that rani varniahi came to Ayodhya to meet Kaushalya’s sister and Rani Varshini Kaushalya, wife of King Rampad of Anga.  They had no children and laughed, asking Kausalya to have children. Kaushalya told Dasaratha and Dasharatha pledged to Rani Varshini and, while playing Raghukul’s word, gave the baby girl in Rani Varshini’s lap. In this way, Shanta became the princess of Anga Pradesh.

However, it is said in some legends that King Dasharatha had adopted Shanta to a sage and that he nursed Shanta and married her to the sage.  Shanta went to Anga Pradesh in her childhood and that is why there is little mention of Shanta during the childhood of Ram and other brothers.

Married to Rishi to end the drought

Shanta Ang used to help her father Raja Rampad in running the kingdom in the country.  Once she was sitting with her father talking that a person came and started crying in front of the king.  It turned out that the state is facing drought and it does not even have seeds.

Shanta was distraught after hearing this.  He asked his father to get the yajna done for the rain.  Then Rishishrang was called and after his yagna there was a lot of rain.  The specialty of Rishrishna was that where he stepped in the drought, it would rain and the drought would end.  The king was pleased and married Shanta to Rishishrang and Shanta became a sage wife.

King Dasharatha wanted sons of queens to be born to carry the dynasty forward.  That is why on the advice of Sumant, King Dasharatha sent an invitation to Rishishrang.  Rishishrang put a condition that I will not perform the Yajna alone, my Bharata (wife) will also have to sit in the Yagya.  Then Shanta was called, King Dasharatha could not recognize her but when she touched and introduced the feet of King Dasaratha and Kaushalya, it was found that she is the daughter of King Dasharatha.  After this, Rishishrang sat with Shanta and performed the Putrakameshti Yajna, which resulted in the birth of Rama, Lakshmana, Bharata and Shatrughna.