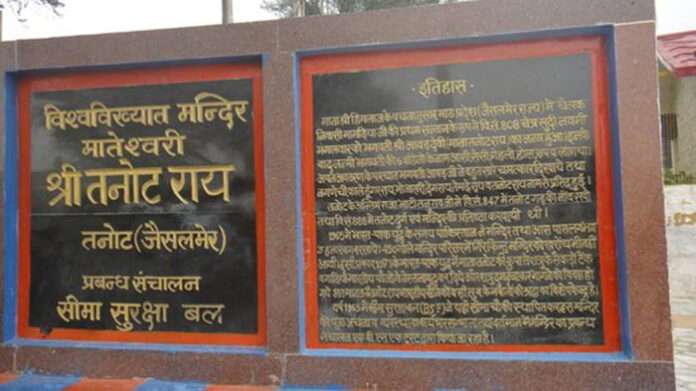 In the face of adversity, belief or faith in God can often help one gather courage. The Indian Army has many stories of God assisting Indian soldiers who were on the verge of annihilation and ultimately triumphed.

The story of Tanot mata mandir, located near the Longewala border in Rajasthan, is one such miraculous tale, in which the local deity Tanot, also known as Awad Mata, prevented any Pakistani tank bomb from exploding, allowing Indian soldiers who were certain of death and defeat to crush the Pakistanis in both the 1965 and 1971 wars.

According to legend, more than 3,000 bombs were dropped near or on the temple during both wars, but none exploded. Some of those bombs are on display in the BSF Museum, which is located within the temple grounds.

Tanot, located 150 kilometres west of Jaisalmer in Rajasthan’s westernmost region, has become one of the most popular tourist destinations, particularly for those who enjoy Rajasthan’s wilderness and stories about army heroics.

The famous Bollywood film Border, which is based on the battle of Longewala in 1971, in which 120 men of the Indian Army crushed over 2000 Pakistani soldiers with a tank squadron, depicted how soldiers’ faith in Tanot Mata kept them going even when confronted with an enemy of such colossal size and weaponry.

Tanot is a village in Rajasthan’s Jaiselmere district, near the Indo-Pak border. Tannot Mata is an incarnation of the divine goddess Hinglaj Mata, according to Charan literature, and she later takes the form of Karni Mata. In the early eighth century, the temple was built.

The Indian Army was put under tremendous strain during the 1965 war with Pakistan, as Pakistan’s firepower was more dangerous than ever before, and the Indians lacked the necessary weaponry to respond to Pakistan’s shelling. Taking advantage of this, Pakistani forces seized large areas, including Kishangarh near Sadewala post, where Indian forces were in large numbers.

Since their supply lines were cut by Pakistani capture of key areas, 13 Grenadiers fighting at Sadewala knew they were fighting a life-or-death battle to maintain and secure their post. On November 17, shelling began on Sadewala, a post near Tanot Mata temple, but surprisingly, none of the bombs hit their intended target, and those that fell near the post did not explode.

According to legend, the Pakistani army dropped over 3000 bombs until November 19th, but the Tanot Mata temple was spared. According to the storey, the deity appeared to the soldiers in a dream and promised to protect them if they stayed close to the temple.

After war BSF took charge of the temple

After India defeated Pakistan in 1965, the BSF established a post within the temple grounds and took charge of the deity Tanot Mata’s Pooja. BSF is still in charge of the temple.

When the Indian Army was thrashing them in what was then East Pakistan, Pakistan decided to engage the Indian Army on two fronts, and the western front was opened in Rajasthan.

They didn’t choose Sadewala this time because it was heavily guarded by Indians who feared Pakistan would repeat the mistake of 1965. Pakistanis chose Longewala, another post near Tanot temple, this time. A company of 120 men led by Major Kuldeep Singh Chandpuri guarded it.

Despite the odds, the jawans never gave up hope and maintained their faith in Tanot Mata. Pakistan launched a full battalion and tank squadron attack on Longewala on December 4. However, the bombs that were dropped near the deity did not explode, and only a company of 120 men were able to crush Pakistani arrogance clad in a squadron of tanks. Longewala is regarded as one of the most important battles in the history of independent India.

Following the battle, the fame of Tanot Mata and her temple grew to new heights, prompting the BSF to build a large temple on the site, as well as a museum housing unexploded bombs fired at the Indian Army. Inside the temple compound, the Indian Army built a Vijay Stambha to commemorate the Longewala triumph, and a celebration is held every year on December 16 to commemorate the historic victory over Pakistan in 1971.