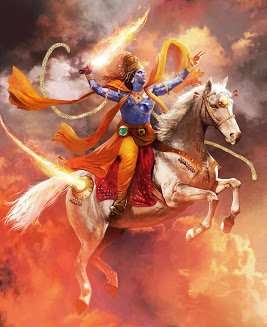 It is told in the Puranas, that at the end of “kali yuga”, Kalki will be descent. He will come to the white horse which is shown in the picture and destroy the demons To the feature belief, kaliyuga is 4,32,000 years old which is still going on in the first phase. Kali-yuga started from 3102Bc, when the five planets, Mars, Mercury, Venus, Jupiter, and Saturn were at 0°(Degree) on Arise. This means 3102+2020=5122 now completed. Still 4,26,878 years left.

Presently a temple is built in smabhal village in Uttar Pradesh in the name of Lord Kalki. Audio, Video, CD, Books, etc Literature material is being developed promoted in the area of New Delhi in his name. Aarti, Chalisa, Purana, etc are sell in the market. Kalki Vatika, an organization active in Uttar Pradesh, claimed that the time has come for the Kalki avatar to born. These people believe that Kalki has the fearsome form of Hindu god to protect the devotes from impious people. He is giving a message to the devotees. His superpower has spread all around the world to protest devotees.

When and Where Lord Kalki born?

Lord Kalki will be born on the Shasthi date of Shukla paksha of Shravan month. This is the reason that this date, is celebrated as the “Kalki Jayanti” festival. Calculation of South India astrologers about the position of the planet at the time of the birth of Lord Kalki when the moon will be in danish Nakshatra an Aquarius.

The Shrimad Bhagwat Purana describes in detail the incarnation of Lord Vishnu. In the second chapter of the 12th wing of the same Puranas, there is a description of God Kalki. In which it is said that Lord Kalki will be born as a superior brahmin son name Vishnu Yasha,  At the place called Sambhal in Moradabad District Uttar  Pradesh. Kalki Avatar consists of 64 arts Kalki killed sinners from the world by riding a horse named Devadatta and will re-established religion.

THE LOST CITY OF MONKEY GOD FOUND IN HONDURAS