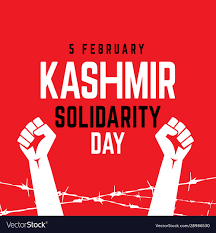 On February 5, people in Pakistan and Kashmir who have been fighting for their freedom for more than 70 years commemorate Kashmir Solidarity Day. This day is also commemorated in memory of Kashmiris who have died in the struggle for independence.

Kashmir’s valley is known as ‘heaven on earth.’ Kashmir is one of Pakistan’s most popular tourist destinations; it is breathtakingly beautiful and a must-see at least once in a lifetime. Unfortunately, the territorial conflict has plagued it since 1947.

Kashmir’s independence has been a source of contention between India and Pakistan since the subcontinent’s partition. With each passing year, the conflict between the two countries worsens.

Pakistan commemorates Kashmir Solidarity Day to show support for the Kashmiri people. Many freedom fighters have died in their fight for a distinct identity on the world map, and Pakistan supports Kashmir’s primary right to self-determination.

In 1990, Pakistan’s opposition leader at the time, Nawaz Sharif, established Kashmir Solidarity Day. Sharif called for a nationwide strike in Pakistan to protest the Indian army’s control of parts of Kashmir. He urged the nation to pray for Kashmir’s independence.

Pakistan has brought the Kashmir issue to the attention of the international community, but international leaders and the United Nations have been unable to resolve the issue. Pakistanis, on the other hand, continue to support the people of Kashmir in their struggle for independence by commemorating Kashmir Solidarity Day every February.

WHY IS SOLIDARITY DAY IN KASHMIR IMPORTANT?

To show that you care

Kashmir Solidarity Day is observed to show solidarity with Kashmir and to remind them that they are not alone. Congregational prayers are held around the mosques on this day to pray specifically for the people of Kashmir.

On this day, everyone pays tribute to the brave Kashmiri freedom fighters who gave their lives in the fight for independence. This is done to motivate and encourage the people of Kashmir.

We are concerned about the people of Kashmir.

Every nation, regardless of its political situation, has the right to self-determination. We commemorate this day to show Kashmiris that we care about them.