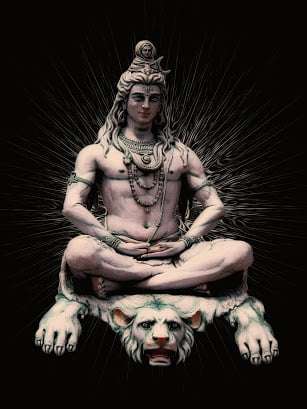 Once upon a time, Devta’s King Indra Went to Mount Kailash to meet Lord Shiva Along with Deva’s Preceptor(देव गुरु) Brihaspati. Lord shiva come to know about their arrival and wanted to test Indra’s Devotion.

Lord shiva Changed his look and sit on the edge-of -Mount Kailash. But Indra did not recognize Lord shiva. Indra filled with full ego. Indra, again and again, tell get out of my way. Lord Shiva sat quietly without replying to his question. After Indra become angry and tried to attack lord shiva with his weapon Vajra.
Lord Shiva turned angry paralyzed the hand of Indra by using his divine power. Shiva’s third eye turned to anger and his angry fire attack Indra. Indra is frightened. Sage Brihaspati apologized to lord shiva on behalf of her disciple  (शिष्य).
On the wish of sage Brihaspati lord, shiva diverted the power of his third eye to the ocean.
So, the angry fire merged in the ocean and was picked up by (Matsya Kanya). Jalandhar was born to give punishment for wrong deeds to Indra.

When Indra comes to know that Indra attacked with his weapon (Vajra) in the course his mother came between and died. After his mother died he becomes angry and wants to know the criminal who killed his mother. After that Asura’s Guru, Shukracharya Raised him and later he became Asura’s King and Trilok adipate. And defeated Indra as well in war.

He married Vrinda (TULSI), daughter of asur raj “Kalnami”.When he becomes the king of three loke. He thinks that he is more powerful than all devas and Trimurti. When he knows about his birth that he is shivansh.His rising ambition is to kill lord shiva to become Trimurti. Because of wrong thinking towards a god he thinks that all deva’s and Trimurti Mahadev are Deceptive and coward.

Once vrinda organized a puja (worship)for Jalandhar’s protection and make him immortal and never defeated by Parvati,Mahadev, and any devas. So Lord Vishnu took Jalandhar’s form and joined the puja and devastated everything for Jalandhar when vrinda know about this.
She becomes angry and cursed Lord Vishnu that he will suffer to his wife as she was suffered for his husband. Lord vishu easily takes his curse and blessed her that she will remember for their honesty and reversible dharma and will be workship in the form of tulsi with him.
Then she committed suicide. When Jalandhar know about his death he becomes angry and attacks mount Kailash with his demon army and yamraj
In War, Jalandhar defeated all devas and son of lord shiva Ganesh and Kartikeya. After many years of fight, he was killed by goddess parvati and lord shiva by his combined power.
During his last breath, Mahadev gives the right lesson to Jalandhar and he found his mother and wife present in Mahadev. Because all the universe present in Mahadev. Jalandhar apologizes to Mahadev and goddess Parvati. Parvati gives blessing to Jalandhar After shivansh angry fire Jalandhar merged into the third eye of lord shiva.
Share
Facebook
Twitter
Pinterest
WhatsApp
Previous articleअनसुनी कथा राम से बड़ा राम का नाम
Next articleLord Krishna