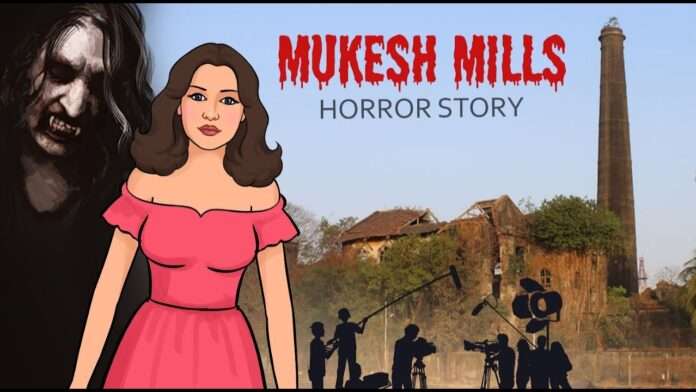 Mukesh Mills is a well-known filming location for directors, but it’s also a well-known hotspot for paranormal activity. You may not believe me right now, but this place has sent shivers down the spines of many people.

What’s the backstory of here?

The mill was founded in the 1870s by the East India Company, but it was later closed due to excessive losses. A fire then completely destroyed the structure, the cause of which is still unknown. The mill was never remodelled, and it has remained closed since then.

Even film crews avoid working here after sunset. Strange noises were frequently heard by the workers, and there were numerous reports of items being misplaced. Footsteps, random shadows, and the feeling of being watched are all common complaints. One of the actresses was possessed and her voice changed abruptly while filming a scene, according to the most amusing storey. She started yelling at people to get out of there as soon as possible.

There was also a case where a ten-year-old child was possessed while filming. The child was rolling on the ground with his hands behind his back when he regained consciousness in a fraction of a second. On one night, the watchman of the establishment reported seeing someone smoking inside the premises and hearing music coming from within. Some people have undoubtedly vowed never to return to this location.

The mills are located 7.8 kilometres from Mumbai Central Railway Station.

A Haunted House
These mills were built in the 1870s by Muljibhai Madhavani. East African Hardware Limited was his company.

These mills are said to have been built by the British East India Company.

It was the only mill in South Bombay, built on the Colaba region’s Arabian Sea shoreline.
As a result, it had a large private port where the boats could unload cotton bundles and stack finished yard goods.

However, the land was later remodelled in 1975, though the business was forced to close after only a few years. These mills were forced to close permanently after a devastating fire in 1982. The cause of the fire, on the other hand, is still unknown. Since then, the mills have been closed.

The mill had been abandoned and untouched until a few years ago, when a film director decided to film a horror film in this eerie location.
Finally, while working within the mills’ area, the cast and crew of the production began to witness several paranormal activities.

Currently, it is believed that many actors and directors avoid shooting at the mills because of the dangers. Strange occurrences such as ethereal footsteps, eerie sounds, ghostly figures, and the feeling of being watched are said to occur frequently in the mills area.

The iconic account of a film actress being possessed during a production is one of this mill’s haunted stories.
She was photographing at the location when her voice abruptly changed; the voice that came out of her mouth demanded that everyone evacuate immediately.

Because everyone believed she was possessed by an evil entity, all of the crew members left the mills for the day and absconded as quickly as they could, vowing never to return.

The mills’ watchman closed the mills’ gates, and as he stepped out of the property, he heard music coming from the mills’ inside premise.
That day, no one was even shooting. He claimed to have seen someone smoking in the area. However, his fear prevented him from going inside, and as a result, he was unable to check the situation.

He went inside the next day to check, but no one was there. Children are involved in another Mukesh mills storey.

During a shot, a ten-year-old girl began acting strangely, writhing on the ground with her hands turned backwards, as if she were possessed.

Along with the children, everyone else in the room was terrified. They began to scream and cry out in terror.

The father of the possessed child claimed that his daughter returned to normal as soon as they left the mills.
Do you know who owns Mukesh Mills?

Do you know who owns Mukesh Mills?
Mr.Muljibhai Madhvani is a businessman.

Heropanti Luka Chuppi is a film directed by Mukesh Mills.