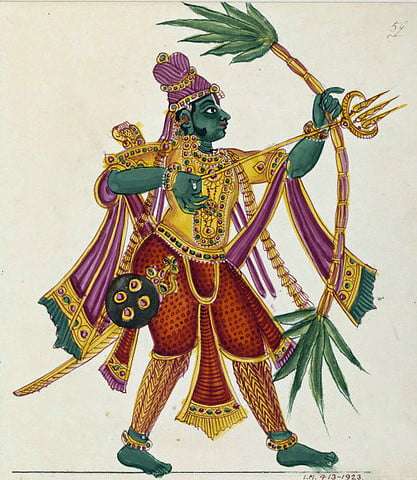 According to mythology, whenever Lord Shiva gets angry, his third eye opens, which causes the entire earth to be disturbed.

One such incident is associated with Lord Shiva and Kamadeva, when Kamdev was consumed by Mahadev.

According to the legend, when Daksha Prajapati invited all the gods and goddesses except ‘Lord Shiva and his daughter’ Sati ‘in his yagna, the goddess Sati could not bear this contempt of her husband Mahadev.  And by jumping into Yajnivedi, she commits self-immolation (Bhasma).  When Lord Shiva comes to know this, he creates a ruckus in the whole creation with his orgy.  Due to this, all the Gods distraught reach Kailash to explain to Lord Shiva.  Lord Shiva calms down at the persuasion of the gods, but Lord Shiva comes to the holy confluence of the Ganges-Tamsa for ultimate peace and engulfs him in samadhi.

After the death of mother Sati, Lord Shiva renounces the entire world.  The world is not able to run properly due to their disharmony.  On the other hand Sati is reborn as Parvati.  This time also Parvati expresses her desire to marry Lord Shiva, but Shiva did not have love and work in mind, he was completely disenchanted.  Because of this, Lord Vishnu and all the gods with him seek help from Kamadeva for the welfare of the world.

After this, along with his wife Rati, Kamdev starts to awaken the ‘Kama Bhava’ hidden within Lord Shiva.  Kamadev tries to awaken Mahadev carefully through his many efforts.  Which includes the routine of Apsaras etc.  But all these efforts fail before Mahadev Bholenath.  Finally, in order to awaken Bholenath, Kamadev hides himself behind a mango tree and runs that wreath on Shiva.  Pushpaban goes directly into Mahadev’s heart and his tomb is broken.  Lord Shiva gets very angry due to breaking his tomb, and burns the cupid hidden behind the mango tree with his trinetra.  Rati rubs her husband’s ashes on her body and starts mourning.  And also demands justice from Lord Shiva.

When Lord Shiva came to know that this was a plan created by the gods for the welfare of the world, Shivji pledged to Rati that her husband would be born in Yadukul as the son of Lord Shri Krishna.

Later, Cupid is born as Pradyumna of Krishna’s son, and is reunited with Goddess Rati.