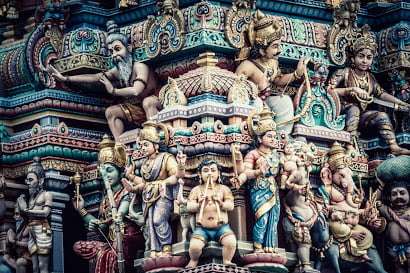 In Kali Yuga, Hanumanji is considered to be the earliest happy deity and Hanumanji is also one of these Ashta Chiranjeevi’s.

Goodess Sita  blessed Hanuman after hearing Rama’s message in the Ashoka Vatika of Lanka that he would remain ajar-immortal.  He has got a boon that he will never die and never get old.  For this reason, Lord Hanuman has always been considered the source of renewable power because he is eternal.

Many incarnations of Lord Shankar are also found in the texts.  One of them is an avatar who is still wandering on earth for his salvation.  These incarnations are of Ashwatthama, son of Guru Dronacharya.  When there was war between Kauravas and Pandavas in Dwaparyuga, Ashwatthama sided with the Kauravas.

The sage Markandeya is an ardent devotee of Lord Shiva.  He pleased Shiva and meditated and became Chiranjeevi due to Mahamrityunjaya mantra Siddhi.

Vibhishan is the younger brother of the demon Raj Ravana.  Vibhishan is an exclusive devotee of Shri Ram.  When Ravana had killed Mother Sita, Vibhishana had explained to Ravana not to enmity with Rama.  On this matter Ravana expelled Vibhishana from Lanka.  Vibhishan went to the service of Shri Ram and supported Dharma in eradicating Ravana’s iniquity.  Then Shriram gave him the boon of immortality.

Parashurama is the sixth avatar of Lord Vishnu.  Parashurama’s father was Rishi Jamadagni and his mother Renuka.  He was born on Tritiya of Shukla Paksha of Vaishakh month according to Hindi Panchang.  Therefore, the Tritiya which falls on the Shukla Paksha of Vaishakh month is called Akshaya Tritiya.  The birth time of Parashurama is believed to be in the treaty of Satyuga and Treta.  Parashurama’s initial name was Rama.  Rama meditated hard to please Shiva.  They too have got the boon of being immortal.