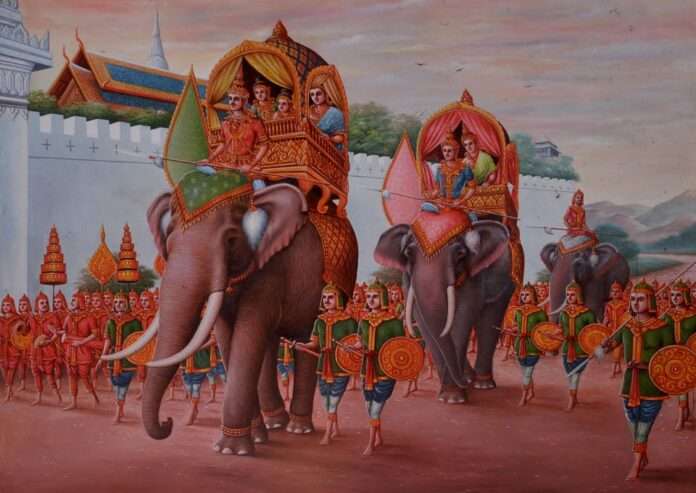 1. Hiranyaksha: Hiranyaksha was a terrible monster.  He wanted his authority over the three worlds.  Hiranyaksha ruled South India.  Due to invincible and immortality in the war with Brahma, he was terrorized on the earth.  Hiranyaksha was following Lord Varaharupi Vishnu and he used to challenge his war work by ridiculing his work of building the earth.  When the Varaha lord got out of the abyss and set the earth on top of the sea, then his attention went to Hiranyaksha.

Along with Adi Varaha, there was Mahaprabal Varaha army.  He took his army and marched on the region of Hiranyaksha and crossed the foot-sea of ​​Vindhyagiri and surrounded the city of Hiranyaksha.  The Mahasangram took place at Sangamner and finally Hiranyaksha came to an end.  Even today there are many places in South India under the names Hingoli, Hinganghat, Hingna River and Hiranyakshagan Hanged.  It is noteworthy that Lord Vishnu took the incarnation of Neel Varaha first and then killed Hiranyaksha as Adi Varaha, after this, the incarnation of White Varah was taken after Narsingh incarnation.  It was only after killing Hiranyaksha that Swayambhuva Manu got the empire of the earth.

2. Mahabali: Mahabali Bali is Ajar-Amar.  It is said that even today he remains on earth and is engaged in work against the gods.  Earlier it was located in Mahabalipuram in South India, but according to belief, now the desert is in Arabia, which in ancient times was called Patal Lok.  Ahiravan also lived there.  At the churning of the sea, he received a horse while Indra got an elephant.  It is noteworthy that the number of horses was more in Arab and elephants in India.

Bali, the king of the Shiva devotees, the Asuras, is very much mentioned in the Puranas.  He was a lord of immense powers but a god.  He believed that the gods and Vishnu tricked him.  However, Bali was also a devotee of Vishnu.  Lord Vishnu granted him the boon of being immortal.  Hiranyakashyap had 4 sons – Anuhallad, Hallad, Bhakta Prahlad and Sanhallad.  Raja Bali, son of Virochan was born to the family of Prahlad.  Bali knew that my ancestors were Vishnu devotees, but he also knew that my ancestors were killed by Vishnu, so Bali had a grudge against the gods.  He stayed in the proximity of Shukracharya and invaded heaven and drove the gods.  He had become the lord of three worlds.  A new history of India begins with Bali.

3.Vritrasura – It is a matter of Satyuga when a demon named Kalakeya had terror on the whole earth.  He lived under Vatrasura.  Plagued by both, all the gods thought that it was now necessary to kill Vritrasura.  For the slaughter of this Vrittasura, Dadhichi made a weapon from the bones of the sage named Vajra.  Vritrasura was a powerful asura who attacked the cities of the Aryans several times and plagued them.  In the end, Indra took the front and he had a fierce battle in which Vritrasura was killed.  Due to this heroic act of Indra, he was praised and praised all around.

Researchers believe that the original name of Vritrasura was Vritra, possibly the ruler of Assyria.  It is also mentioned in the Zoroastrian Avesta.  Vrittra attacked the Aryans and in order to defeat them he worshiped a goddess named Advaishur.  This war of Indra and Vritrasura had a profound impact on all cultures and civilizations.  That is why the triumph of Homer’s Iliad and the tales of the gods of Greece and Geas and Apollo are similar.  This shows how widespread the Indra-Vratra war had on the then world.

4.Ravana: Ravana was a skilled politician, commander and penetrator of architecture as well as Brahman knowledgeable and versatile.  He was said to be elusive because he knew Indrajal, Tantra, Hypnosis and all kinds of magic.  He had an aircraft that no one else had.  Due to all this, everyone was afraid of him.  According to one belief, Jai and Vijay, councilors of Asuraraj Vishnu, took birth again as Ravana and Kumbhakarna and established their empire on earth.

Ravana laid the foundation of Raksha culture.  Ravana took Lanka from Kubera and took his plane away.  Ravana kidnapped Rama’s Sita and arrogant Ravana insulted Shiva.  Despite being a scholar, Ravana was cruel, arrogant, arrogant and tyrannical.  Though there were many other villains during the era of Rama or Ravana, but Ravana was the foremost among them all.

5. Jarasandha: Kansa was maternal uncle of Lord Krishna.  He removed his father Ugrasen from the post of Raj and became a king himself.  Kansa was extremely cruel.  He had a tendency like asuras, demons and demons.  Kansa in his former birth was an Asura named ‘Kalanemi’ who was killed by Lord Vishnu.  The emperor of Magath was Jarasandha of Kansh.  It is difficult to determine one of the biggest villains of the Mahabharata period.  Jarasandha was the bigger villain than Kansa.  Kansa was killed in the process of killing Lord Krishna.

If anyone was troubled by Lord Krishna, it was Jarasandha.  He was the son of a king named Brihadratha and was divided into two pieces at birth.  The demon named Zara had added him when he got his name Jarasandha.  Jarasandha was with the Kauravas in the Mahabharata war.  Jarasandha was the ruler of a very cruel and imperialistic tendency.  According to Harivansh Purana, he defeated the kings of Kashi, Kosala, Chedi, Malwa, Videha, Anga, Vang, Kalinga, Panday, Saubir, Madra, Kashmir and Gandhara and made them all under his control.  This is the reason why much discussion of Jarasandha is found in the Puranas.  Kalayavan was a friend of Jarasandha.
Jarasandha had many fellow kings – the king of Kamarup was Dantavak, Chediraj, Shishupala, Kalingapati Poundra, Bhishmak’s son Rukmi, Kadh Anshuman and the kings of Anga, Bang Kosal, Dasharana, Bhadra, Trigarta etc.  Apart from these, Shalvaraj, King of Pawanesh Bhagadatta, King of Sauviraj Gandhar, Subal Nudgejit, King of Mir, Gobhard, King of Dard etc.  Bhima divided Jarasandha’s body into two parts and killed him.